They kept up the Christmas carol

This season I discovered a new favorite Christmas hymn-- a melancholy number by Christina Rossetti. The first verse (also the gloomiest) particularly won me over:

At ev'ry word a reputation dies.

An interesting comment from a student's response to her classmate's rough draft:

"I am not quite sure what you mean by 'imperialism is somewhat un-American.' The thought seems very confusing to me."
Posted by Erk at 10:15 AM No comments:

I stand on my own bottom

Because colon cancer appears again and again in my family's medical history, I have regular colonoscopies-- a fate generally reserved for those over sixty. I'm thrilled to report that yesterday's colonoscopy went so well that I can wait at least two years before I return to my left side in the GI clinic. Here are the three most telling quotations from yesterday's exam:

Ereck: "The nurse who put in my IV..." [That's all I have to say to make Kenneth curl in pain and horror. At times, I've been known to tease and torture Kenneth by talking about medical procedures, etc. that I know will freak him out. In this case, however, I was just tellin' m' story.]

from Getting Ready for Colonoscopy, required reading provided by the clinic: "Start to drink the [gallon-sized] bowel prep. Try to drink at least one 8-ounce glass every 10 minutes. If you feel sick to your stomach, stop drinking. Wait until the nausea passes. Then start drinking again, but at a slower rate (1 cute every 15-20 minutes)." [Was this process conceived by a UW binge drinker?!]

Ereck, near the end of the procedure when sedation was beginning to wear off: "I don't feel that I've contributed enough to this conversation."
Posted by Erk at 8:48 AM 2 comments:

Out on a Limb

When I die, I hope to come back as Heather and Jessica.
Posted by Erk at 1:43 PM No comments:

Last night, while dining alone at Wasabi, I sat next to two entitled Coastie chicks who greeted their waitress with "We'd like two misos, a warm edamame, a salad with extra dressing-- all ASAP, because we're starving." They later ordered a handful of rolls-- the sorts of things my Japanese host father identified as "sushi that isn't sushi." To my added amazement, they tailored the rolls: "Oh, and a Bucky Badger Roll, but I'd like eel on the inside and avocado on the outside. And an Inside Out, but with tempura on the outside..." The waitress smiled as she did their bidding, fetching the extra little plates and bowls that they asked for; the Coasties clucked and praised her for being so attentive. The talk about their appetites was endless and distressing: "Oh! I'm sooo hungry. I just want to order everything. But my eyes are always too big for my stomach: I know I'll end up taking half of this home." Since 85% of the women in my class wrote their research papers about female body image, the topic's been on my mind, and I wondered how to read the code of this facial-perfect, slender-waisted couple's talk about food. Why they were so hungry or why did they have to claim to be hungry? Were they enabling one another to eat? I thought of times in high school, when my friend Pace and I would order huge pieces of cake and then talk about how disgusting fat was and how much we disdained the obese.

As the women began to catch up with one another, they processed recent evenings out. One had blacked out at a house party, awoken on a couch and realized she had to get home, though she wasn't sure how she made it there. A recent romantic relationship began in similar fashion: the young women found herself in some guy's bed, totally ignorant of what had transpired the night before-- how she got there, etc. All of this in the most blase tones imaginable. Or, blase with a twist of giddiness.

I'm struck by the fact that these women really needed "one of those square little plates for [I missed what it was for. I was eating as well as listening, mind you]," yet, they delighted in losing whole chunks of a night out, losing control not only of their bodies but their beings. Maybe it's all just the same thing: they talk about blackouts and lost time in order to gain some semblance of control over those experiences. But the tenor of this topic contrasted so vividly with the delivery of their orders to the waitress and the melodrama of their famine. The latter two vibrated with a sort-of anxious need to control their bodies and environments.

It did me good to finish my udon, wrap myself in my Margiela scarf, and march out into the frosty night. Heading up State Street, I chose to walk rather than take the bus because lately I've been feeling kind of soft around the middle.
Posted by Erk at 8:40 AM 1 comment:

"Big Thinks," or today's class-- almost the last--
(between two haiku, a quote from a student's paper)

"how would english help
our paper in statistics?"
i taught them nothing.

"you create a more solid understand [sic] for yourself. However, this is not always the case."

a season's notes to
no one. revise the question
as "Are we not men?"

At ev'ry word a reputation dies.

Her Too Charitable Soul

And when William allowed his budding passion to burst forth, her too charitable soul was powerless against his ardour.
Posted by Erk at 8:19 PM No comments:

On a recent trip to Chicago, Kenneth compared Bistro 110's Salad Niçoise with our house version and Monty's valiant though often lackluster attempt. In recent weeks, the peak of tomato season made for lots of delicious salads, including the two below. The first is our house version of Salad Niçoise. The second is the quick, convenient variation (potatoes boiled instead of roasted, everything mixed in together, boiled eggs jettisoned to save time, etc.) that I make when it's just me for dinner. Bistro 110 includes a wee mound of anchovies. For a wee mound of reasons, I prefer to use anchovy paste in the dressing. 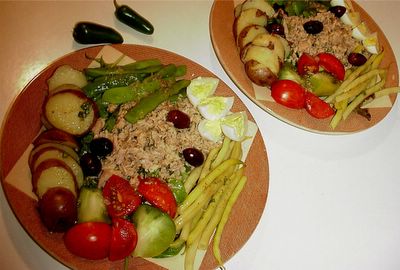 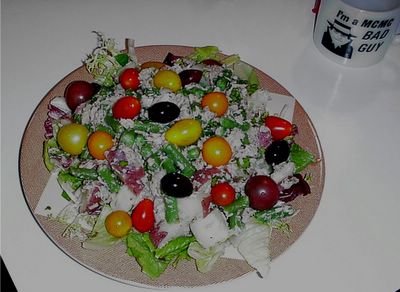 Home Alone (it's hard to get an attractive photo of flaked tuna)
Posted by Erk at 8:44 AM No comments: 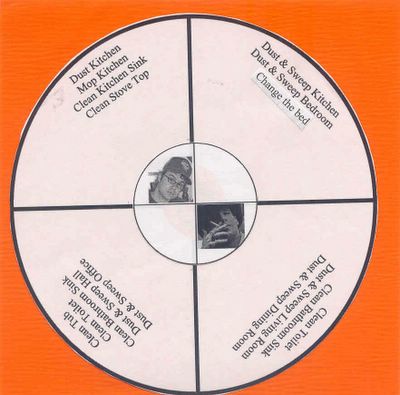 If you checked my blog in weeks past (bless you!) and didn't see the below entries, don't worry. I just added a number of back-dated posts consisting primarily of images. I decided that, if I can't manage to write a decent blog every once in a while, I can at least offer up some images of what's going on. This after encountering numerous set-backs in my reconceptualization of the blog-- blah, blah, blah. Then, my computer broke down, crippled under the strain of spyware and viruses. Thanks to Kenneth, I'm up and running again, able to share some stuff that I've been saving up. xo
Posted by Erk at 10:35 AM 5 comments: 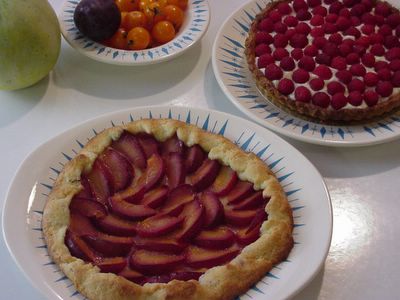 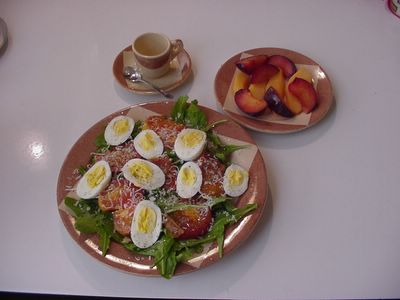 This summer lunch in Wisconsin featured a juicy heirloom tomato, wonderfully fresh argulla, and the most perfect plum. 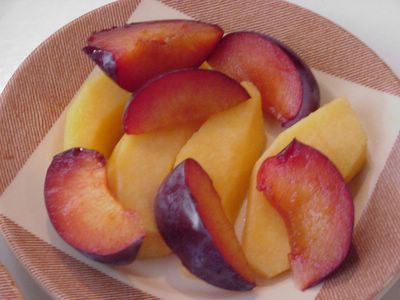 Posted by Erk at 10:30 AM No comments:
Labels: Nearly Perfect Salads 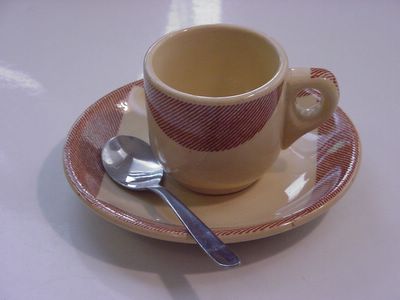 I have yet to acquire a proper espresso machine; however, these new demitasse cups are a step in the right direction. Currently, we use this pattern, Tweed by Wallace (and Tepco, though Tepco's version of the pattern is slightly different), for day-to-day dining. Kenneth suggests that the new demitasse cups will be perfect for after-dinner coffee should we ever get our act together and host a dinner party.
Posted by Erk at 10:26 AM No comments: 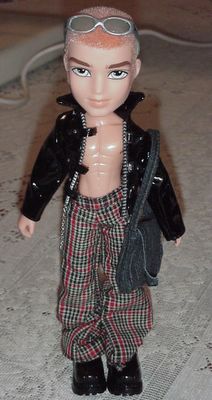 The Bratz Boyz are "the boys with a passion for fashion.... and the Bratz!" This is London Punkz Cameron.

Cultivating a Renaissance in the Garden

Having recently purged roughly 220 entries from www.gardenofashes.blogspot.com, having recently scrapped the original moniker “Man of Feeling” and replaced it with “Siege of Derry,” a brief explanation or history seems in order.

I claimed this URL in the fall of 2002, intoxicated by the novelty of the blog format and encouraged by a group of new-ish friends who were similarly enthusiastic about the budding form. The blogs fostered and fed my relationships with these friends; the links on the sites mirrored and traced our connections, our associations, our growing understanding(s) of one another. My boyfriend Kenneth and I also had lots of fun communicating with one another and chatting about the public statements of our friends. It was a little dishy, a little flirty, a little dirty and a lot of fun.

For better or for worse, this circle of friends fell apart after a while, rather suddenly, speedily and untidily. Kenneth continued his blog with increasing success. His witty, astute and crisply written entries generated—rather organically—a readership, a new circle of friendships and connections based more in cyberspace, though with a significant anchor in Madison reality.

I had a tougher time. I continued to blog somewhat steadily, in great part because I knew a number of long distance friends checked in on me here. But the site lacked purpose and often scuttled itself with idiosyncrasy and obtuse antics. When I discovered that some grad students in my program had blogs, I hoped that this new circuit might renovate and re-innervate the blog; however, through no fault of theirs (they have great, inspiring blogs), I failed to rise or revise to the occasion.

Things came to a head at the end of the Spring 2005 semester: the director of English 201 ("Intermediate Composition," the course I taught at the time) organized a read-in for all the grad students teaching the class. I decided just to grab something off of the blog—something light and fun but reasonably crafted. To my astonishment, I found only one, maybe two, entries that I liked enough to share with my peers, and both of these appeared in the first few weeks of the blog. For the read-in, I delivered my 10.22.02 entry to great effect. I also began to question whether or not I should keep up the project, which had degenerated mostly into memes and quiz results (for the record, I’m a BCBG clutch).

Over the next couple of posts, I aim to outline the new goals for the blog, which I hope will become a more satisfying endeavor for myself and for my few kind, patient readers. The 10.22.02 post will set the standard for now. Check it out if you have a sec and haven’t hit it before.
Posted by Erk at 8:58 AM 1 comment:
Newer Posts Older Posts Home
Subscribe to: Posts (Atom)