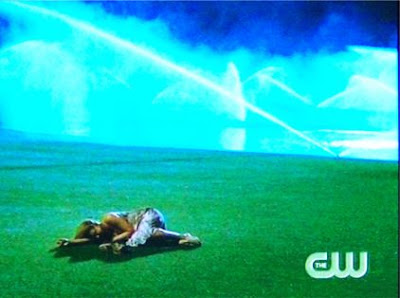 Bradford emailed the NYT review of the CW's summer teen soap opera, Hidden Palms: "Will you watch this show and tell me all about it?" Silly question, despite the fact that I'm trying to cut down on my TV consumption. Kenneth, who recently caught me agog at the conclusion of Pochahontas II: Journey to a New World, smirked, "You'll watch anything!" Teen dramas are perhaps my favorite, and Hidden Palms features families with only children...how can I resist???

The pilot was terrific-- ingeniously tooled, with much potential etched into each character and relationship and with a wonderfully balanced set of analogs, foils, parallels, and rivals. 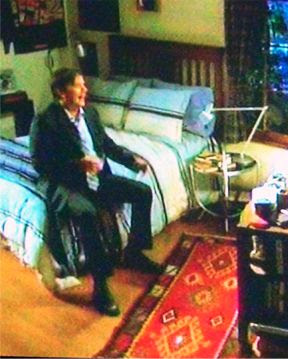 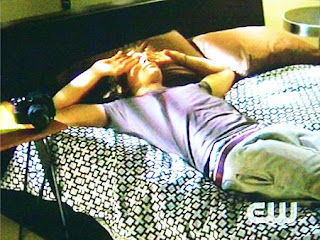 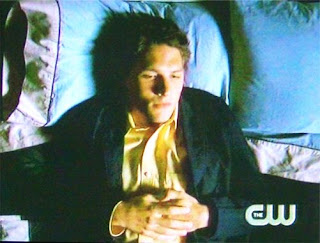 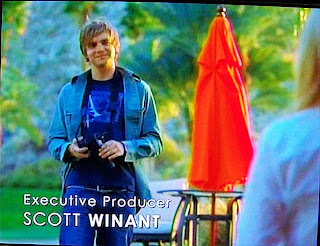 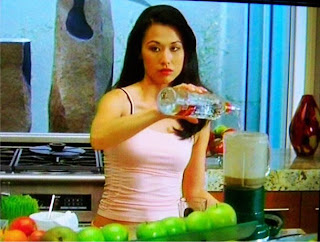 a shot of wheat grass and a shot of vodka. 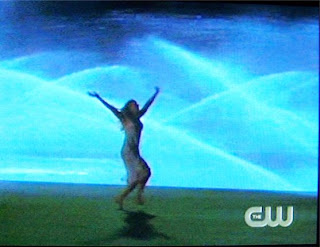 youthful antics appearing early in the show, to be followed by Christina's World [above] near the episode's conclusion.

Speaker Meeting:
"Not fit for public consumption. I was too weird for the main stream, and I was too normal for the fringes. Hell, I didn't fit in anywhere. I. did. not. belong. And you know, all I ever wanted was just to belong." 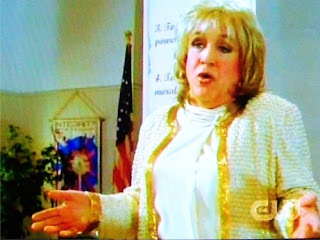 That's the third step peeking out behind Jesse Jo [Leslie Jordan]. I don't know if I've ever seen a drag queen as a reoccuring character on television. Jordan's character appears both in and out of drag. I'd call his presence 1) a delight and 2) a smart move from the show's creators: a nice link (or wink) to the show's gay audience (what teen soap doesn't have a gay audience?) without the complications of gay-teen sex. 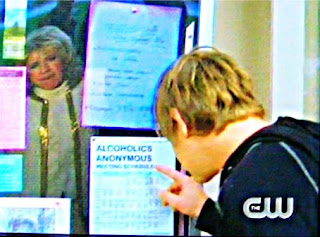 The pilot's main character, Johnny, is three months sober and without a driver's license after a downward spiral of drug and alcohol binges. It all seems to have started after he witnessed his father's suicide. Viewers get to share the spectacle, which opens the series: it, uh, starts with a bang. Thusfar, the writers offer an insightful representation of recovery and AA:

Johnny: I was thinking about going to a meeting. Dr. Hill gave me the name of a place.
Karen (Johnny's clueless mother): So soon? We just got here.
J: Well, they suggest I go everyday.
K: That doesn't seem very practical.
J: That was the plan. I think we should stick to it.
K: New town, new home: I thought we were done with all that.
J: That's not how it works, Mom. 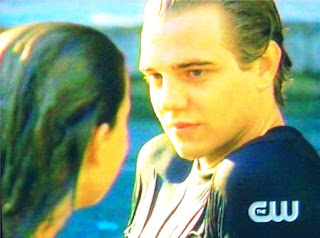 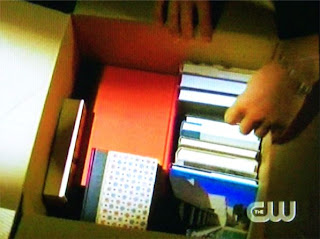 the return of the red umbrella? 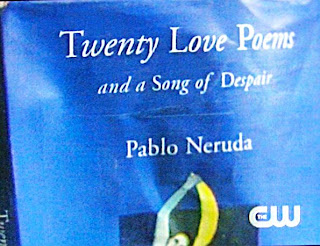 I don't think I've ever seen such a tight close-up of a book before. How lovely that they selected this attractive and plausible hard-cover. This shot ends the first episode.
Posted by Erk at 4:16 PM 3 comments: 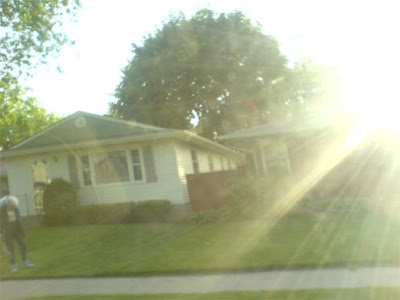 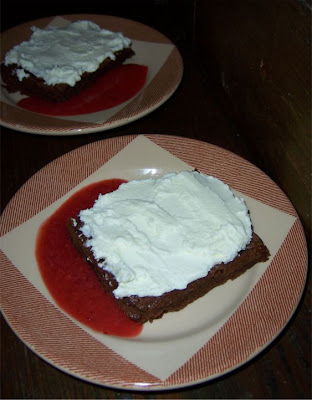 Feeling festive, I spruced up my regular fudgy brownies with mascarpone icing and strawberry coulis.
Posted by Erk at 9:07 PM 3 comments:

While I was making dinner, I began to hum Coldplay's Clocks, one of the many songs that I murmur unconsciously as I go about my business. At some point, I should catalog those tunes. The list is guaranteed to horrify: I often feel bad for Kenneth who has to listen to me as I mindlessly hum Sleigh Ride and Dance of the Sugar Plum Fairy throughout the year...

Anyhoo, as I continued to make our shrimp salad, Kenneth and I began to rewrite the lyrics of Clocks.

My best effort, I think:

Some clocks you have to wind;
I prefer the battery kind.

Kenneth, of course, trumped me repeatedly. I favor these couplets:

Analog clocks, they have hands;
I sing about clocks with my band.

Clocks are square and clocks are round,
And alarm clocks make a sound.

Such silly boys today who poke fun at Coldplay.
Posted by Erk at 8:46 PM No comments: 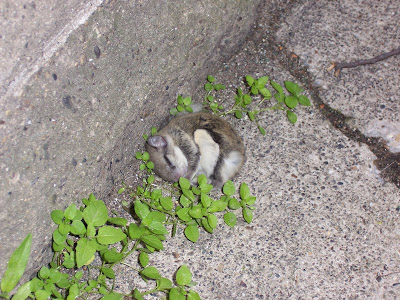 Repotting herbs this morning, I happened upon this wee creature whose life was ending at the base of our house. Some peculiar hallucination led me to think briefly that it might be a kitten. Must have been something about the light? I brought Kenneth out to inspect and consult. We went out for a lovely brunch party, and when we returned, the mouse had died.
Posted by Erk at 1:28 PM No comments: 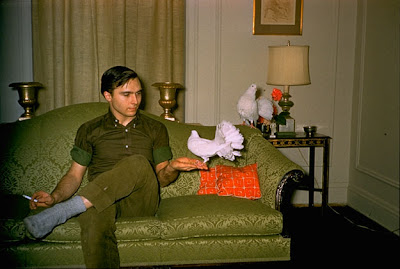 Joe Campbell photographed by Harvey Milk
Posted by Erk at 12:11 PM No comments:

My first foray into Mastering the Art of French Cooking, a pristine copy of which I recently picked up for $1 at my local thrift store. I served the timbale with meaty chunks of portobello mushroom and sauce Mornay. I certainly plan to use a timbale as a first course-- probably paired with a little salad-- at a dinner party. But, it was great as a main dish for just Kenneth and me on the back porch, eating, chatting, and watching the bats flip through the air. 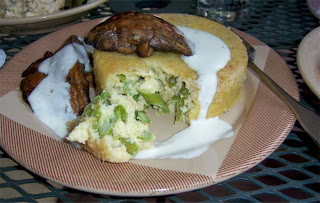 ...summer salads and herbs from my wee container garden. I served these salads with-- that's right-- yet another salad of mixed greens. Also, big hunks of crusty sour dough bread. That's salmon salad on the right. I've taken to folding cubes of boiled potatoes into my salmon salad to give it a little more substance. I was worried that we might not feel full after this, but it turned out to be a perfectly satisfying quick summer meal. Of course, we topped everything off with some delicious cake... 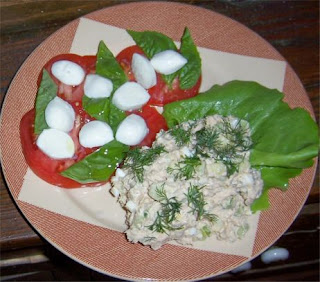 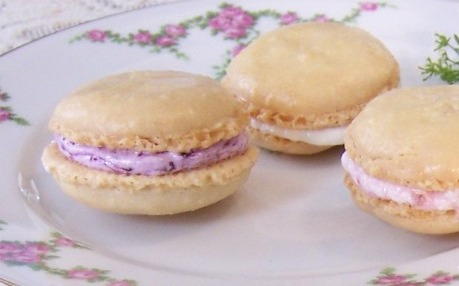 Look! I made these Fr. macaroons. Awhile ago, I admit. But, I remain proud of them. The delight I took in eating them remains as well.

2.
While an undergraduate, a friend of mine dated one of his professors. Lately, I've been thinking of an anecdote that my friend shared from their affair. While cooking together, my friend burned some garlic they were sautéing, and the professor responded caustically, sharply criticizing my friend for not knowing how to properly sauté garlic. Mind you, burnt garlic can destroy a dish. But what a fuck: was it not enough that the turd was already misusing his authority. I would hope that any teacher would respond to such a mistake more compassionately. If knowledge, experience, and authority serve only to reiterate one's own proficiency, then they serve poorly, with an existence more akin to the virus than the organism.

3.
In the last several months, I have
-burned rice.
-undercooked rice.
-overcooked shrimp which consequently became rubbery.
-dried out multiple pieces of fresh fish.
-served innumerable lukewarm dishes.
-forgotten to salt.
-cooked scrambled eggs until they were horridly dry.
-served at least one dish that made both Kenneth and me sick.
-botched an entire batch of vanilla pudding, which never thickened properly. Kenneth generously ate one portion of the milky soup, but he refused additional servings.
-broken yolks while frying and poaching eggs.
-burned garlic.


4.
I feel dreadfully guilty about food wasted because rendered inedible and even food merely tolerated because ill-prepared, but mostly I marvel at all the wonderful things I, my friends, and restaurant chefs manage to pull off. Subtle morels, berry sorbet, barely boiled asparagus with a dash of salt and splash of lemon, basil chiffonade on blood oranges, ground pecans in the flour used to batter fried fish, and Fr. macaroons: miracles all. What a pleasure to know them and share them.
Posted by Erk at 1:23 PM 1 comment:

II. Anaxarchus too enjoyed the intimacy of Alexander and flourished about the hundred and tenth Olympiad. He had for an enemy Nicocreon, the tyrant of Cyprus. And on one occasion, when Alexander, at a banquet, asked him what he thought of the entertainment, he is said to have replied, "O king, everything is provided very sumptuously; and the only thing wanting is to have the head of some satrap served up;" hinting at Nicocreon. And Nicocreon did not forget his grudge against him for this: after the death of the king, when Anaxarchus, who was making a voyage, was driven against his will into Cyprus, Nicoreon took him and put him in a mortar, and commanded him to be pounded to death with iron pestles. And then they say that Anazarchus, disregarding this punishment, uttered that celebrated saying, "Beat the bag of Anaxarchus, but you will not beat Anaxarchus himself." And then, when Nicocreon commanded that his tongue should be cut out, it is said that he bit it off, and spit it at him. And we have written an epigram upon him in the following terms:

Beat more and more; you're beating but a bag;
Beat, Anaxarchus is in heav'n with Jove.
Hereafter Proserpine will rack your bones,
And say, Thus perish, you accursed beater.

III. Anaxarchus, on account of the evenness of his temper and the tranquillity of his life, was called the Happy. And he was a man to whom it was very easy to reprove men and bring them to temperance. Accordingly, he produced an alteration in Alexander who thought himself a God, for when he saw the blood flowing from some wound that he had received, he pointed to him with his finger, and said, "This is blood, and not...

Such stream as issues from a wounded God;
Pure emanation, uncorrupted flood,
Unlike our gross, diseas'd, terrestrial blood.["]*

But Plutarch says that it was Alexander himself who quoted these lines to his friends.

Biking through Garbage Juice is Gross.

Beautiful morels, cut in quarters and waiting to be prepared: 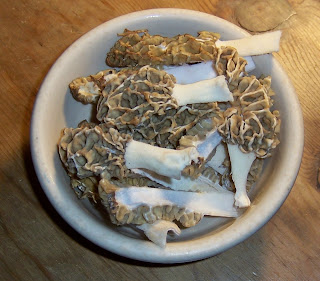 Bradford tells an anecdote about Zuni-chef Judy Rodgers grabbing a plate on its way into the dining room, declaring that the plate looks too perfect, messing it up a bit, and then sending it on its way. I share this story as a preface to this image of the morels being served. Not until I reviewed the photos did I realize how hastily and haphazardly this meal was plated. I know that there appears to be a major river of herbed mayonaise with roasted garlic flowing through the middle of the plate. I promise it wasn't as excessive as it may appear. 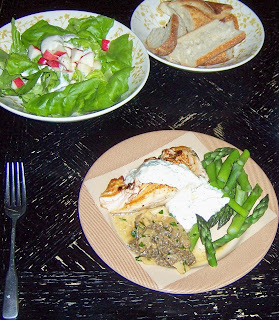 The morels were amazing amazing amazing. Though the plate looks a mess, the salmon, asparagus, and morels made wonderful sense once in the mouth.
Posted by Erk at 9:05 PM 2 comments:

Deborah Layton, Seductive Poison: A Jonestown Survivor's Story of Life and Death in the People's Temple
John Kenyon, The Popish Plot
Edmund White, My Lives: An Autobiography
J. H. Plumb, The Growth of Political Stability in England 1675-1725
Posted by Erk at 9:16 PM No comments: 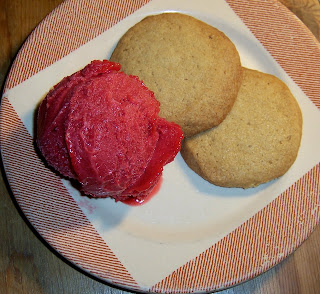 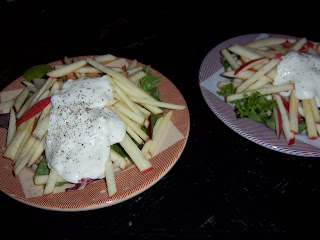 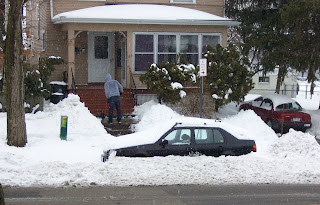 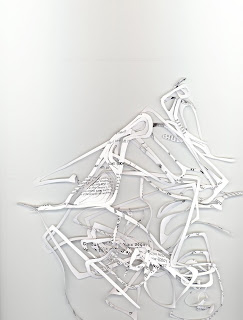 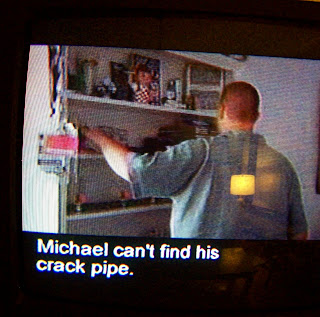